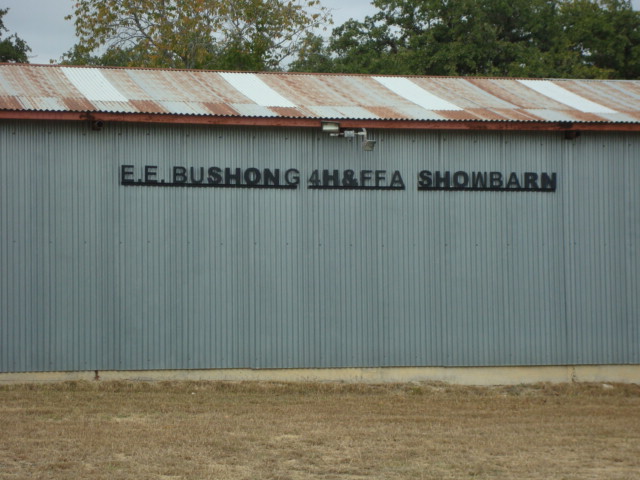 Since the first show in 1942, the Real County Junior Livestock Show has grown considerably. Scroll down to read a more detailed history of the show. 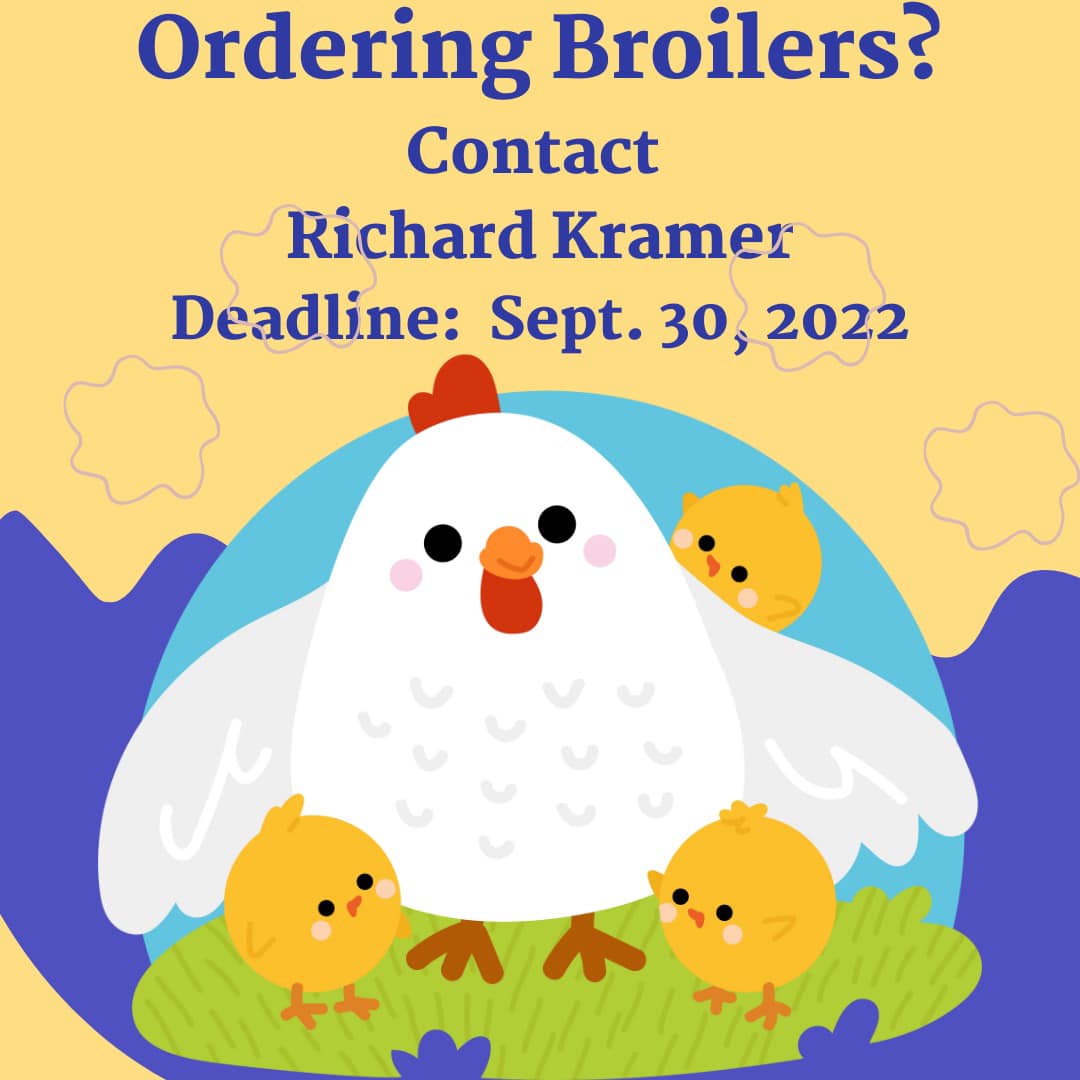 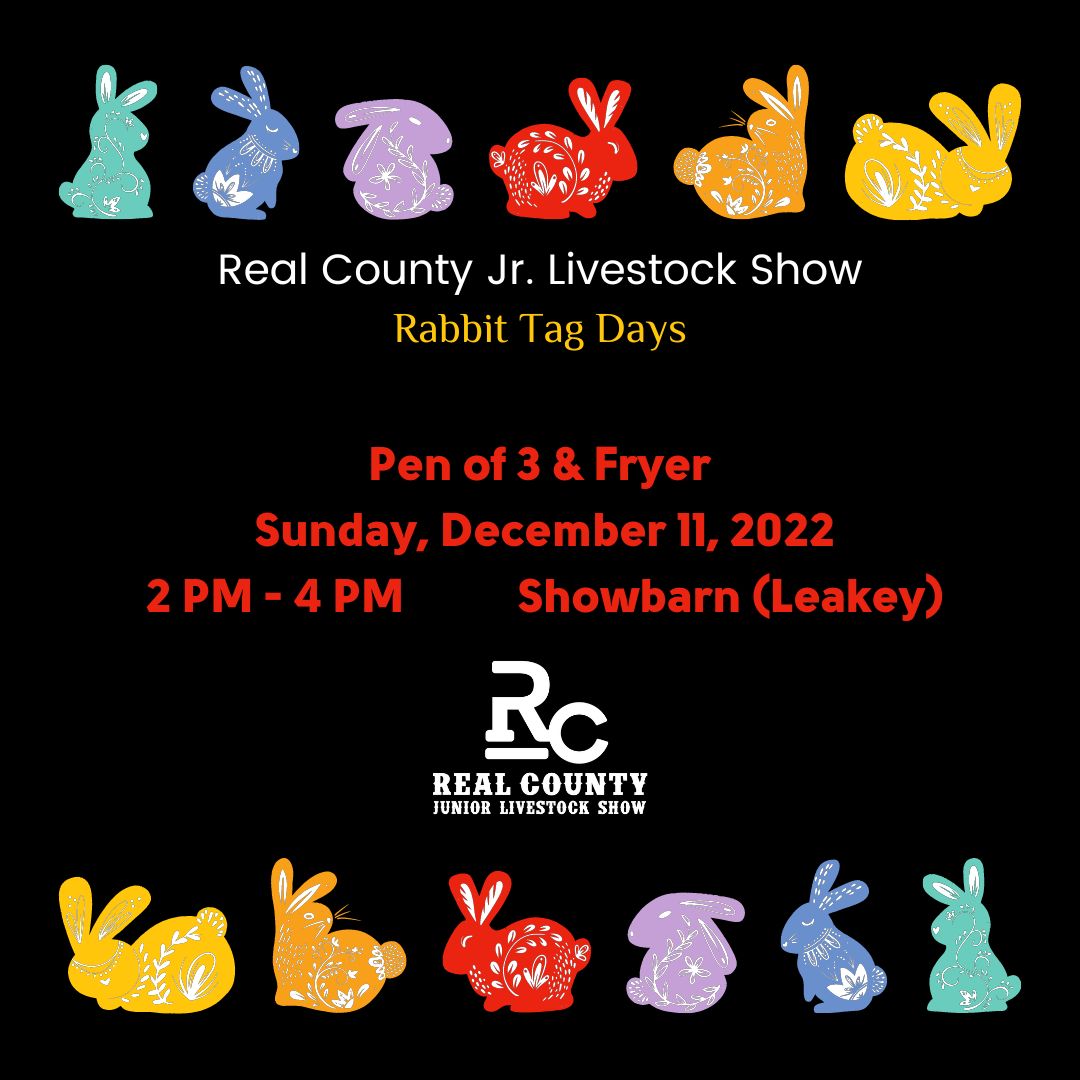 Make sure you enter online before going to your Tag Day. Online Entry Deadline Thursday, September 22 for Rabbits 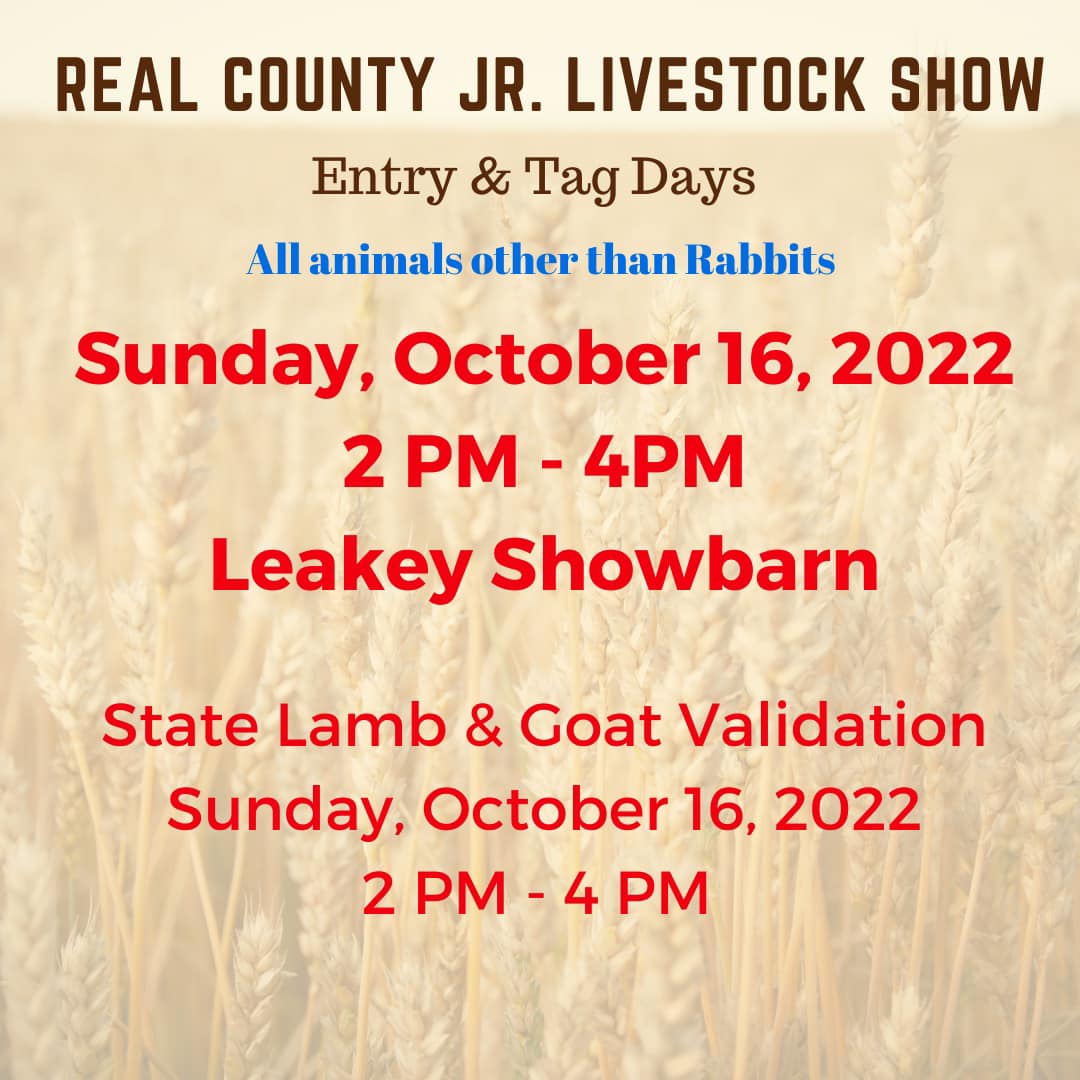 All other animals
Tag Days

In the year 1942, O. B. Magrill was the County Agent and it was decided that they would have a calf show.  Willie Patterson sold the calves to the boys after they were weighed in Uvalde.  These are the boys who bought the calves: LeRoy White, Leonard Davis, Bill James, Luther Bushong, Shannon Crenshaw, and Rodney Reagan.  The show was held in front of John Rick’s building, where the highway forks now in front of the Canyon Theater.  It rained and the streets were very muddy.  We spectators stood under a lumberyard shed to get out of the rain.  After the show, the calves were bought by Bill and Lon Brice, and they were hauled to San Antonio to the Stock Market.

In 1945 another show was held in back of Bill Brice’s Feed Store, where the museum’s new implement barn is now.  Mr. John Gibbons was the County Agent.  This show had four participants: Sonny Moffett, Jolly Baugh, Madelyn Blyth, and Luther Bushong.  They each showed a pen of 10-grade doe kids in the hair and then they were sheared and the hair was judged.  These two shows were told to me by Luther Bushong.

In 1949 the first 4-H show with Mr. Gaston as County Agent was held at the Legion Hall.  This show included fat lambs, registered doe and buck kid goats, calves, and capons.  There were 25 exhibitors and Pete Gulley was the auctioneer.

February 16, 1950 the first annual FFA and 4-H Livestock Show and Sale was held at the Legion Hall.  Again it rained.  The stock was put in the building and handed out the window for showing in the area east of the building.

After this show the parents of the exhibitors decided they needed a permanent place for the annual show.  Mr. E. E. Bushong was approached about selling the present site of the barn to the club.  He thought about it for some time and agreed they needed the land and he gave it to them.  This was to be the Real County 4-H and FFA Show Barn.  This was indeed a nice gesture.  The warranty deed from E. E. Bushong to Real County 4-H and FFA Clubs states: “This property is to be know as the E. E. Bushong 4-H and FFA Barn and a sign to be erected on the show barn.  If there is as many as five (5) years between shows, the property reverts back to the owner.  Dated 4 December 1950.  Recorded Vol. 21, Page 512, Deed Records Real County, Texas.”  (Note: The Bushong Family deeded the property to Real County Junior Livestock Association on July 27, 2001.)

After receiving the site, the adult leaders went to work receiving donations and the first long shed to house the animals was built in time for the February 11, 1951 show.

February 11, 1951 show and sale was the first one to be held in the new barn.  Included in the sale were registered goats, both buck and doe kids, fat calves, capons and hogs.  There were 71 lambs, four hogs, 21 chickens, and 15 calves sold at auction.

In the following years an auction ring was built, scales were installed, and a kitchen was built.  They continued to show the animals in the area adjoining the kitchen.  A larger kitchen, much improved, was built because the Club adults, friends and family were serving a wonderful barbeque lunch with homemade pies for dessert.  Still later the original barn was enlarged to give space for showing the animals, for the auction and seating also for the spectators.  In 1992 the washroom for the lambs and hogs was enclosed on the west end of the barn.  This year, 1994, flag poles were erected by Shasta Tom and her children, the Jimmy Tom and Carroll Spurgin families.  These were dedicated to the memory of Carroll Tom, a longtime supporter of the Clubs.

During the early years the fat lambs were shown in the wool.  In later years the lambs were shorn.  For several years there were classes for breeding sheep and cattle.  Later rabbits and horses were included.  No longer do they have breeding sheep and cattle classes.  The rule now is that there must be five calves with at least three exhibitors, so the fat calf division is no longer included.  There is not enough interest.  In the last few years they have included meat goats and pen-of-three broilers.

We have had many exhibitors of champion animals and all of the youth have been winners in different ways.  Some of the awards include SWTJC Showmanship Scholarship, High Point Winner (donated by Bandera Electric Cooperative, Inc.), T. L. Brooks Memorial Award, Jimmy McCaleb Memorial Trophy and the coveted Showmanship Award.

In 1970 the 4-H girls’ projects were shown and judged.  53 entries were entered in the Arts & Crafts division.  Sewing winners were Mary Rushing and Kim Cox; Cooking winners were Pamela Godbold and Sharon Christenson; Crafts winners were Carol Coax and Cindy Mitchell; Art winner was Kim Cox.  I wish I could name all the winners throughout the years, but the list is too long.  The cakes made by the winners of the Cooking Division were auctioned off.

The Uvalde Livestock Auction and Sales have been the auctioneers for the Real County shows for years, always selling the stock for top prices.

Many more years of successful shows are wished for by this author.  Thanks to Hallie Chisum for pictures and information, Mac Gilliat for pictures; Patricia Chisum for researching the Uvalde Leader News for past shows; Luther Bushon for the information on the first two shows; Marjorie Kellner for getting the information about the deed for the show barn site.

4-H and FFA as remembered by Tela Patterson in 2012

O. B. Magrill was County Agent in 1942.  He was very interested in getting a show program for the young people.  The first show I remember was held in front of John Ricks lumberyard where highway 83 and the street in front the theater is now.

The boys showed out in the street in the rain.  The rain played a part in all our shows.  Calves were sold to the contestants by Willie Patterson at market value and were weighted at the stock yards in Uvalde.  The boys showing were Bill James, Leroy White, Luther Bushong, Shannon Crenshaw and Rodney Reagan.

In 1945 a show was held in back of Bill Brice’s feed store.  Calves were shown by Jolly Baugh, Luther Bushong and Sonny Moffett.  This year a goat class was added.  When O. B. Magrill went to World War II, Ivy John Gibbens became our County Agent.  He served until Magrill came back from the service.  Magrill did not stay long and Charlie Gaston became our agent.

Our show was next held at the Legion Hall.  We were again rained on but never rained out.  This year we had our largest group of contestants.  Some of the ones with calves were Charles Wesley Nichols, James Pate, Gary Baugh, Allyne Crider, Dell Chisum, Evelyn Chisum, Barbara Jo Large and Luther Bushong.  We had lambs, goats and capons.  Before the animals were ready to be judged a sifting committee marked the animals that were sifted, but there were no extra pens to put them in so they were left in the exhibition pens.  The animals were in small pens against the building and all the rain from the roof ran into the pens.  The animals were handed in and out the windows for judging. By this time the chalk marks had washed off and one sifted lamb was mistakenly shown and went on to win its class. This was really kept a deep dark secret.

After that show, the adult club decided to try to find a place for a show barn.  Mr. Edgar Bushong was approached and he gave the land where our show barn is now.  The first building was just a short shed to house the animals in.  The calves were tied out in front to a chain between two trees, at this time we also had capons.  That year I remember Barbie Jo Large, Jackie Cravey and Allyne Patterson showing calves.  True to form we had rain, snow and ice